Frittering away a good crisis 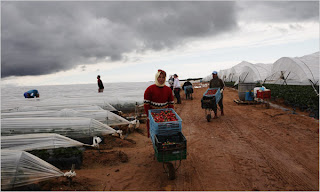 My friend and colleague Don Monkerud sent a NYT article, March 16, 2009, Fruit Picking Causes Strife in Andalusia as Natives' Job of Last Resort, by VICTORIA BURNETT. Other American friends may be interested in my response, how things look to somebody (me) who lives there.

Thanks, Don. I hadn't see this article, but I have known about the problem. It's also serious in Jaén, olive country. Spanish bricklayers and plasterers trying to learn how to pick olives (their grandparents knew, but they've forgotten) and competing with all the Moroccans and others. Locally, in Carboneras, some of the Romanians we had come to rely on -- especially a very skilled electrician -- have gone home. There may be no work for them back in Romania either, but at least they have a home there and it's familiar. People from Mali and Mauritania are still arriving, however, risking their lives in overcrowded open boats to get to the Canary Islands, or joining the Moroccans to try to dodge the Guardia Civil patrols and land on some Andalusian beach.

So far, there hasn't been much anti-immigrant violence -- nothing on the scale of the vigilante patrols in the U.S. Southwest. But tensions are building. The Spanish Socialist government is limited in its options by its membership of the EU and the euro (the European Central Bank won't let its members devalue the currency or take other unilateral measures to stimulate exports etc.), and it is afraid to exercise the options it does have or to test the limits. And as you know if you've been reading Krugman, or even if you haven't, the ECB is far too conservative in a climate that demands bold measures.

My impression is that the U.S., China and Brazil are the countries best positioned to weather this crisis. Of the major economies, that is. Brazil and China are still growing (economically), though much slower than last year. Meanwhile, European socialists have forgotten what socialism was all about and, by fearing to break with their "liberal" (in Europe, that means pro-business conservative) colleagues, are letting this perfectly good crisis go to waste.
Posted by Baltasar Lotroyo at 5:38 PM