Generations of mothers of rebellion 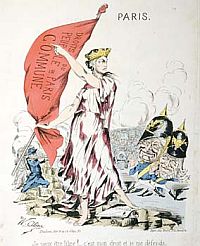 A good friend and colleague has commented about the Agnès Poirier article I praised here recently, disputing her characterization of the Paris Commune of 1871 as "the mother of all rebellions." In his note he reminds me of many of the earlier ones, some much, much earlier, and of course the Révolution Française of 1789. I think we should give the journalist a little latitude — she needed a quick, economical phrase. But let's consider why and how the Commune mattered, and if it was a "mother," what have been its children?

The motherhood of revolution must go back to Eve, the original rebel. That is, if we mean "origin". But of course revolution has had many generations of mothers, each spawning offspring that had to adapt to its times.

What caught the attention of everybody in the late 19th century, revolutionary or counterrevolutionary, was that the Commune erupted in one of the principal cities of industrial capitalism. This could mean either that it was the last flare of the big one of 1789 or the harbinger of an ever more potent urban revolt. And that among the declarations of the communards were visions of a society that translated Liberté, Égalité, Fraternité into what were then modern, practical terms.

The Commune and all the earlier revolutions my friend mentions were many things at once, aiming in different directions, impelled by different and often contrary groups. I'm drawn to the communards because they are more of my time than Saint-Just, Robespierre, Danton et al., in language and proposals. Europe and the world had changed enormously since the revolution of 1789, in large part because of that revolution (and American independence, and Napoleon and his wars, and of course the steam engine, etc.).

To us today, pre-1789 is a much more foreign place than 1871. When I read about poor, brave Eugène Varlin, or about the women at the barricades (there were hardly any in 1789, but they were everywhere in 1871), they stir memories of our own days of rebellion, of 20th century Communists I've known, of debates I suffered and engaged in. Like all analogies, reading 1871 through, say, 1968 or the 1970s distorts both, I know that, but still, they stir me. And I want to get to know them better, by imagining their lives in my novel. They (the metalworkers, bookbinders and seamstresses, to name 3 of the main participating occupational groups) feel closer to me than the sans culottes, but if I live long enough, maybe one day I'll want to write about them too.

In any case, the Commune acknowledged its own "mothers" and "grandmothers" — especially 1789, 1830 and 1848 —  and its offspring have included Lenin's and Trotsky's concepts of revolution, much of the language and aims of the Spanish Second Republic (the one finally defeated by Franco), the many guerrilla movements in Asia, Africa and Latin America in the 1960s, '70s and '80s, and even in rebel discourse today.

Posted by Baltasar Lotroyo at 8:55 PM