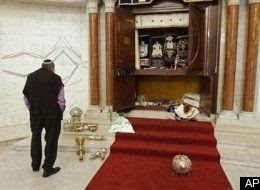 Here's a good, sober analysis of an explosive subject: Anti-Semitism in Venezuela, A Taboo Subject for the Left? by Nikolas Kozloff. Those of us who are enraged by Israeli aggression in Gaza, the encroachment of settlements and carving up of Palestinian territories in the West Bank and other abuses have to be wary of alliances with racist kooks who blame Jews for everything. As though military aggression and territorial expansion were especially Jewish traits (hardly the image of Jews back when Marx wrote his famous essay, see below).

The president of the Federation of Jewish Communities in Spain, Jacobo Israel, made the point in a recent interview that Israel is held to much higher standards than aggressors in, for example, Sudan, who have caused ten times as many victims as the Israelis in Gaza. True, but the reason may have less to do with contempt for (or is it fear of?) Jews than with contempt for Africans, from whom we expect no better. For a similar reason, many activists are quicker to excuse Hamas rockets and Muslim suicide bombers than Israeli bombs and bulldozers. In current U.S. and European mythology, Israeli Jews are imagined as a civilizing force upon those more barbarous Semites, the Arabs.

And that is the problem: Anti-Arab anti-Semitism, that is, hostility to the Semitic Arabs, in some diplomatic and business circles is stronger than their anti-Jewish anti-Semitism. The people running the U.S. have tried to use Israel to police the region, and those running Israel have used that support to advance policies that benefit themselves and their friends, but not the region, or the U.S., or even the Israeli population as a whole.

no better than any other people, and no worse. No more deserving of security in their homes, and no less. We either hold all human beings to the same moral standards, or we don't really have standards. Qassam rockets hitting an Israeli home or school are as horrible as aerial bombardments on apartment buildings and other schools in Gaza or Lebanon. BUT those with greater power -- in this case, those with the bigger army -- have the greater responsibility, because they are better able to take the risks of peace.

Clip: The animated documentary Waltz With Bashir is Israeli filmaker and Lebanon (1982) war veteran Ari Folman's way of coming to terms with that violence and responsibility.
Posted by Geoffrey Fox at 1:29 PM 3 comments:

The news from Nicaragua has been disheartening: a multi-voiced liberation movement we could believe in, and in whose 1979 victory we rejoiced, now transformed into a machine for the personal power of Daniel Ortega, excluding the best and brightest and most generous of his erstwhile comrades. So it is with relief I turn to look north from Managua to its smaller neighbor, El Salvador. There too a multi-voiced, valient force of guerrillas waged a long war. It ended not in total triumph for the FMLN, but in a negotiated settlement that at least created a wide opening for the Left to operate politically and far more safely than before. And if Mark Engler is right, the goals of liberation and greater equality of opportunity are still driving forces in the movement. Check out Mark's article on the coming elections, the FMLN's candidate Mauricio Funes, and his chances of victory. (I hope Mark isn't responsible for the cliché of the headline -- his analysis is more original than the title would suggest.)

If you understand spoken Spanish, check out Mauricio Funes's noisy website Mauricio Funes Tv. The current video is devoted to the problems of the overworked and underappreciated peasant women. Sounds promising. He's not a warrior, but a TV journalist, so video is his medium.

Posted by Geoffrey Fox at 7:29 PM No comments: