Waking up the bear

All writers have to have some psychological trick to use when the going gets rough or when you just don't know how to confront the blank screen or page. For some, it can be a mood-altering substance like alcohol or opium, but that's dangerous and, from what I've seen from writers' bios, works less well the more you use it. Much better and safer is recourse to an alter ego. Jorge Luis Borges had one that he called Jorge Luis Borges, who he claimed was the one who really wrote his stuff. Me, I have a whole team to call on:

Lion I call on when I need a quick and ferocious response, especially when writing fiction; for example, in entering the consciousness of Arslanshahin (whose very name, "arslan," means "lion"), the quick and ferocious war chief in A Gift for the Sultan

Mr. Glib is helpful when I just need a cleverer way to say not much at all, or have to summarize a complex idea tightly — as in the promotional text on the back cover of my novel. 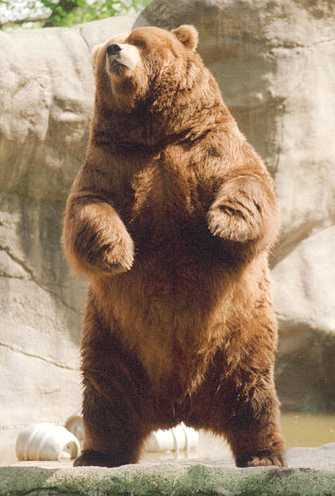 And finally, for the really big challenges, Bear. He is harder to stir into action, but he is so big and lumbering he won't stop until the job is done. I've had to wake him up this week, because without him I could never deal with the job before me now. Too detailed and subtle for Mr. Glib, too ponderous and time-consuming for Lion. It's a serious review of a serious scholarly book, on a historical period that I don't yet understand as well as I must. As long as it was just me and Lion and Glib, I kept finding excuses to put it off, or to dance around the topic. But now that I have awakened Bear, he won't let me stop until we've found out all we need to and get the job done. (Sometimes I wish he'd just go back to sleep, but now that he's aroused there's no stopping him.)

All these characters live within me, like any good alter ego. You can read more about them here. All of us send greetings to you and your alter egos, too — you must have one or two at least, right?

Here's how Horst Bienek put the problem of the writer alone, without such an alter helper, in the last stanza of his poem about his worksite ("Der Arbeitstisch"):