With this holiday wish for your health. 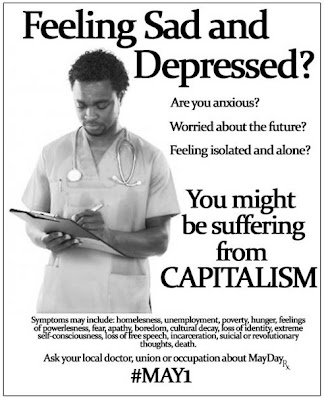 From Gef and a comrade

Posted by Geoffrey Fox at 1:43 PM No comments:

Why is Spain in such a mess?
And all this occurring just as Spain is supposedly celebrating, or at least commemorating, 35 years of what here is called democracy, since the approval in 1978 of the Constitution that was supposed to bring post-Franco Spain into the the modern world. And there, in that Constitution and the way it was hammered out, and how it has been interpreted in the years since, lie the keys to almost all of Spain's current dilemmas. With the added complication of something completely unforeseen in 1978: the loss of fiscal autonomy to the European Central Bank + associates (especially the Bundesbank), dictating deficit, tax and public spending rules that make it more difficult to solve any of those problems.

The most divisive issues in Spain were not really resolved in the 1978 Constitution, but simply covered over in deliberately ambiguous language to achieve the broadest consensus. These divisive issues were mainly:
The pseudo-democratic procedure cobbled together to solve the first of these issues has left most Spaniards feeling that they are not represented by any party — especially because although the parties make promises to compete for votes, they don't feel obliged to fulfill those promises once elected and exercise such discipline within their ranks that no dissidence is allowed.

The ambiguity on the second point allowed pressure from the centralizing, conservative Partido Popular, through its influence on the courts, to overturn a reform of Catalonia's governing statutes (involving the relative emphasis on the national language, castellano — what we call "Spanish" — and Catalan and other issues of self-determination), taken in Catalonia as unpardonable meddling (intromisión), especially since a very similar statute was approved in neighboring Valencia (which also speaks a variety of Catalan, but was governed by the conservatives whereas Catalonia had at the time a coalition leftist government).

The other problems listed above stem mainly from the rigidity and inconclusiveness on the territorial and democratic procedure issues. There are too many courts (Audiencia Nacional, Tribunal Supremo, Tribunal Constitutional all top-ranked in the justice system, and all the regional courts) with different criteria and stacked with judges placed there by political pressure or, in some notorious cases, removed when they take justice issues too seriously: Baltasar Garzón is the best known, but there have been others. This makes it very difficult to prosecute corruption cases against politicians who have their party's support. And has for similar reasons made it almost impossible to control the banks and financial markets — since the people supposed to do the controlling are part of the problem.

As for the Church — well, we'll save that for later. (Though I've already discussed the issue in earlier notes, for example Claiming the soul of Spain (2008/02/10).  If you're curious about other thoughts I've had on these themes, just click the link "Spain" below and the blog notes will pop up.

Posted by Geoffrey Fox at 12:40 PM No comments: