The Real Reason Why Arizona Passed Such Harsh Immigration Laws

This argument by Greg Palast (link below) makes a lot of sense. Of course, an alternative policy for Republicans panicked by the growing Hispanic vote would be to give them some reason to vote for their party instead of the Democrats. Like, including their voices and their concerns in their platform. Republicans have learned to do that in Florida; why not Arizona? (I think I know why: there are more rich Cubans than rich Mexican Americans; Cubans have, after a long hard struggle, bought their way into the GOP in Florida.)
The Real Reason Why Arizona Passed Such Harsh Immigration Laws | | AlterNet

Simon White of "Variant Perception" is worried by Spain's private debt. Just to let you know. Me, like a lot of people in this country, I'm more worried about Barça right now (fútbol is a new passion of mine -- first time I've cared much for a team in any professional sport). And about the enormous confusion and political paralysis caused by the dysfunctional justice system, but private debt maybe should go on the list as 3rd priority. Here you can hear and see Simon White on the Business News Network (of the CTV of Canada's Globe and Mail).

Variant Perception
Posted by Geoffrey Fox at 10:48 AM No comments:

More proof that the Internet is really frustrating to censors. They're not great cartoons, but interesting precisely because they were censored -- and thus tell us something about what Apple thinks it's doing.
Cartoons Banned By Apple: A Gallery - Apple - Gawker

Posted by Geoffrey Fox at 10:18 PM No comments: 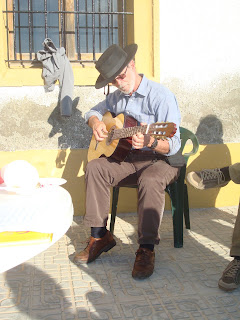 Lots of wildlife pops up in spring. Yesterday we spotted this old gypsy, lost in his melody, up at the lighthouse on Mesa Roldán.
Posted by Geoffrey Fox at 6:50 PM 1 comment:

Some odd partners for liberty (Spain)

On Friday we adult "Personas Libro" joined with Carboneras school kids  to recite verses of Miguel Hernández, a Communist poet in the civil war whose work was suppressed during the Franco regime. His poems from just before and during the war are often rousing and combative, those he wrote to his starving family from prison are gentler and moving, and while not all of it is great poetry, some of it is, and it is almost always intense. The grade school and high school kids took it all very seriously, and some of them -- even a couple of the littlest ones -- were superb orators. When it came the adults' turn, Susana recited Hernández famous "Para la libertad," which became an anthem for rebels everywhere. And I chose the shorter, evocative "Canción última."

This year is the centennial of Miguel Hernández birth, but another reason we are remembering his poems is that one of Spain's best-loved troubadors, Joan Manuel Serrat, has again recorded them. When he first sang them on a record in 1972, it was an audacious defiance of the regime and the first time most Spaniards heard them. Today, it is still a provocative gesture, a way to upset those who want to forget about Franco's prisons and disappeared and are willing to take extreme measures to silence the one judge who wanted to find out just what happened.

On our way out of the act commemorating the Communist poet Miguel Hernández, we each received a book by the Falangista poet Luis Rosales, who -- like Hernández -- was born in 1910. But these labels, though true, are unfair. Hernández was more than a Communist, and Rosales much more than a Falangista. Both were poets. If they had happened to meet, they may even have liked one another. Rosales, from a very conservative, very Catholic family, did join the Falange at the beginning of the war. But he was also associated with a magazine published by Pablo Neruda, and was a personal friend of Federico García Lorca. And it was to his house that Federico García Lorca ran to avoid arrest when the Falange and the rebel generals seized Granada, in 1936, and it was in that house that Lorca was arrested, very soon after to be killed by the Falange -- despite Luis Rosales attempts to save him.

Rosales lived to 1992, and outgrew his Falangismo. And if his later protestations are to be believed, his understanding when he joined was that the movement was respectful of human life and dignity, and made a serious mistake in assuming that the generals who rose against the Republic would be also.

Hernández died in prison of tuberculosis, in 1942. Had he lived, he might also have come to question his earlier political faith. Or perhaps, as did many Spaniards, he would have remained a loyal Communist, I'd like to think to the Communist party that adapted to new conditions under Santiago Carrillo and become one of the artificers, in an odd partnership with the ex-Falangista Adolfo Suárez, of a Spanish constitutional democracy that resembles neither Stalinist Communism nor Francoist military Falangism. But that democracy was nevertheless built from pieces assembled from those two movements, along with contributions of the Socialists and -- perhaps even more surprisingly -- the king.

The equilibrium of that oddly built structure was so extremely delicate in its early years of "the Transition" -- from Franco to democracy -- that it nearly collapsed before a coup in 1981. It survived, thanks to timely intervention by the young king as well as courageous stances by Carrillo and Suárez and others, even military men, eager to avoid a new civil war. It is stabler now than in 1981, much stabler, but still can be shaken when one of those old supporting institutions wants to pull out to see if it can bring the whole thing down. Like Manos Limpias or the Falange-JONS.

But enough about Baltasar Garzón. The papers and 'net and TV are full of coverage of the campaign against him and the massive demonstrations of support for him, not just in Madrid, but all around the world. If the intention of his accusers, Manos Limpias and the Falange-JONS, was to suppress investigation of the crimes of the Franco era, they really goofed. Now, thanks to this surprising case, people around the world are newly awakened to the issue and demanding investigation.  Spain's most famous defender of human rights about to be removed from the bench because he applied to Spain the same criterion he had used against Pinochet, the Argentine junta, those responsible for the abuses at Guantánamo, etc. -- that is, he regarded Spain's 1977 amnesty as superceded by international law. Astounding.
Posted by Geoffrey Fox at 12:12 AM 1 comment: