This note, Work Under Way on ‘Virtual Fence’ - NYTimes.com, reminded me of an essay by Borges, "The Wall and the Books." The essay, first published in 1950, is a reflection on Chinese emperor Shih Huang Ti, who commanded the building of the Great Wall and ordered the destruction by fire of all books prior to his reign.

He speculates that perhaps for Shih Huang Ti, building the wall to conquer space and burning the books to destroy past time were magic barriers meant to stop death.

The "virtual fence" is a magical barrier in both space (the "fence" part) and time (it's "virtual" character is its transmission of signals that someone or some force has transgressed the barrier). Its magic would surely have puzzled Shih Huang Ti, though, because it is not directed against death, but against an even more powerful American obsession: the invasion of aliens. And its magic is as futile as the other. The Chinese emperor could not stop death and could not even stop fretting about it long enough to enjoy life. And the virtual fence is futile, because the aliens are already among us in space and their virtual incursion in time is, virtually, unstoppable.

Here's one place to find Jorge Luis Borges' 1950 essay, La muralla y los libros. And here it is in English, translated by Gaither Stewart: The Wall and the Books.
Posted by Geoffrey Fox at 11:04 AM No comments:

Email ThisBlogThis!Share to TwitterShare to FacebookShare to Pinterest
Labels: immigration, US politics

A Gift for the Sultan: query 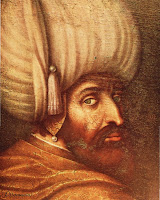 Here's the reworked query I plan to send out to literary agents:

A GIFT FOR THE SULTAN is a 100,000+ word historical novel that simultaneously tells two stories, the actual world-shaking clash of Christian Constantinople and the Islamic horde of Sultan “Thunderbolt” Bayezid in 1402, and the (fictional) relationship between a Christian princess and the Islamic warrior who is supposed to deliver her to the sultan when the acting emperor tries to surrender the city. The desperate conditions inside the walls as nobles, merchants, clergy, juvenile street fighters and foreign mercenaries prepare to die for the greatest city in the Christian world, and the contrasting conditions in the mountains of Anatolia as Bayezid’s horde moves to combat the invading horde of Timur (Tamerlane) are made vivid through both historical and fictional characters. The unexpected defeat of Bayezid by Timur upsets the chessboard and changes the destiny of all them, and of Europe and Asia.

The novel will appeal to readers of International Booker Prize-winner Ismail Kadare’s The Siege (about 15th century Ottoman-Christian conflicts in Albania) and all those eager to understand Christianity’s complicated relations with Islam. It treats respectfully Orthodox Christian, pre-Islamic Central Asian and early Islamic beliefs and practices, attempting to understand rather than condemn behaviors that, although they often led to extremely violent confrontations, at other times permitted intercultural understanding and tenderness.

I am the author of six books of nonfiction with HarperCollins, the University of Arizona Press and other publishers, and of a book that the New York Times Book Reviewer called a “frequently powerful collection of short stories.” (Full review attached.) My other short stories have appeared in Milk magazine, Exquisite Corpse, In Posse, The Copperfield Review, Small Spiral Notebook and Linnaean Street (all online), and in print in Ink Pot, The Threepenny Review, Yellow Silk and Fiction International. I am currently co-writing a book on Latin American architectural history for W. W. Norton.

I must be one of the last persons you would expect to find on Twitter, but there I am. The name is off-putting -- sounds like it's just for twits -- and what can you say in just 140 characters? But it turns out that it needn't be the time sink I feared, if you use it as a gateway or pointer to other more developed texts, images etc. It has already pointed me to some really intelligent sites on architecture and a whole bunch on literature, including Daniel Casey's Gently Read Literature, The Smoking Poet, and the odd but smart Speak Without Interruption, which bills itself as an antidote to the staccato brevity of Twitter and most of the other media we're exposed to. John Kremer gives lots of tips on "retweeting" and how to use Twitter to gather many thousands of "followers," which is not what I'm after, but he also has tips on book promotion which are worth following up. And he's smart about pointing to other sites.
Posted by Geoffrey Fox at 10:03 AM No comments:

Still going on! It was just this kind of betrayal that sparked the rebellion in Kiran Desai's Booker Prize novel. See my more extended commentary on The Inheritance of Loss.

And here's the recent news story: Ex-Gurkha Soldiers Denied British Residency - NYTimes.com
Posted by Geoffrey Fox at 9:09 AM No comments:

To sell my new novel, I need a synopsis, and to get any agent even to look at a synopsis, I need a short, punchy query. My problem is that the novel tells two main stories, on two different levels or scales: The City (Constantinople) vs. the Horde, and the (Muslim) Warrior and the (Christian) Princess. One is earth-shaking, the real history of how in 1402 Christian Constantinople was (barely) saved from the Turks for another 50 years by the utterly unexpected incursion of Timur (Tamerlane). The other just the attraction-repulsion story of two people, invented but meant to represent lots of real people. It's really hard to keep it short without leaving out everything important. But you deserve to know what it's about, so here goes:

In the summer of 1402 the temporary regent of Constantinople seeks to surrender to the Osmanli (Ottoman) siege, and frontier warrior Arslanshahin (“Lionhawk”) is sworn to deliver the key to the city, treasure, and a Christian princess, 15 year-old Theodota Palaiologina, to Sultan “Thunderbolt” Bayezid. The Turkish warrior, faithful to his Central Asian traditions and proud of his capacity for violence, is impatient to unload this slow-moving and exotic cargo so he can return to rapid caravan-raiding with his horse archers, while the princess imagines herself on a mission from God to convert the gazi and all the other Turks. But the destruction of sultan Bayezid by Timur (Tamerlane) at Ankara makes both objectives impossible, and warrior and princess are forced to find or create new destinies for themselves.
Posted by Geoffrey Fox at 12:42 AM No comments:

I love this painting, but I'm also fascinated by Courbet for other reasons, so much so that I wrote a short story (in the form of a screenplay), imagining his encounter with another icon of the Paris Commune. Courbet and the Red Virgin was published online by the Copperfield Review in 2001, but since it seems impossible to find old stories in their archives, I've posted it on my website. Maybe you'll enjoy it.
Posted by Geoffrey Fox at 10:44 AM 1 comment: