A reflection from a very thoughtful colleague. I loved her shadow-puppet analogy to the characters we create in our fiction. I think all of you, fellow writers and readers, will enjoy this.

And along the same lines, some of the shadow beings that populated Dickens' brain, and from there to ours.

Posted by Geoffrey Fox at 7:18 PM No comments: 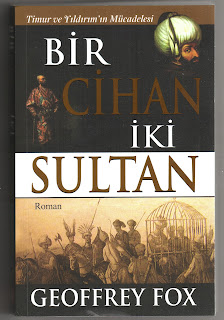 This is the Turkish translation of my novel A Gift for the Sultan, just published by Nokta publishers in İstanbul.

Timur was the khan from Samarkand we know as Tamerlane; Yildirim (or Yıldırım in Turkish), "Thunderbolt", was the nom de guerre of Sultan Bayezid (1354-1403), defeated by Timur in the Battle of Ankara, July 1402.

The novel is about much more than the struggle of these two fierce warriors — it is also about how a great city, Constantinople, confronts a terrible siege and about the complicated relations between Orthodox Greeks and Ottoman Muslims in this frontier period, when neither had unchallenged dominance of the region. But Timur and Yildirim's struggle is a big part of the story, and is of special interest to Turkish readers as part of their founding history.

A Gift for the Sultan (English-language original)

Turkish edition of "A Gift for the Sultan"

I'm delighted to announce that the Turkish-language version of A Gift for the Sultan has just been published by Nokta in Istanbul and presented at the TUYAP International Book Fair in that city. The Turkish title is Bir cihan iki sultan ("One World, Two Sultans").

Posted by Geoffrey Fox at 8:40 PM No comments: