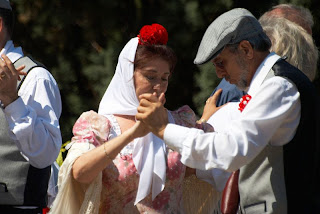 We're in Madrid this week, for the festival of San Isidro Labrador. Isidro was a 12th century farmer ("labrador") who probably never imagined himself as a saint, but he must have had the reputation of being a good man because, decades after his death, when what was supposed to be his corpse was discovered remarkably well-preserved, people began attributing miracles to him. To celebrate his day (15 May) people dress up not as 12th century farmers, but as early 20th century fancypants proletarians, the guys in black-and-white checked vests and caps, the gals in multiflounced red-and-white polkadot dresses, white scarves, and a big red flower in the hair. 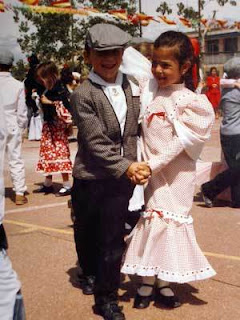 And you're supposed to dance the schotis (also spelled chotis or even xotis), a couple dance falsely attributed to the Scots (hence the name, derived from the German Schottisch), probably because it involves a lot of jumping up and down like a jig.

For us, the big events have been all the free street theater, a performance by a whole series of folkloric dance groups in the park of Las Vistillas, a wonderful concert by Joan Manuel Serrat, and an adaptation by our friend Antonio Rodríguez of Eric Rohmer's "Trío en mi bemol" ("Trio en E-flat"). My alter ego Baltasar Lotroyo plans to post a review on his page

Posted by Geoffrey Fox at 3:13 PM No comments:

Don't bother reading this unless your feeling twittery. A Night Out With - Biz Stone and Evan Williams - The Twitter Guys - NYTimes.com

This earlier piece, though, is actually interesting, about the potential of this seemingly silly system: Finding Utility in the Jumble of Tweeted Thoughts - NYTimes.com. I'm still not sure what I'm doing there, though.
Posted by Geoffrey Fox at 11:12 AM No comments:

Email ThisBlogThis!Share to TwitterShare to FacebookShare to Pinterest
Labels: journalism

And here we have the dramatization of my book Hispanic Nation! Or at least of a couple of the book's themes, "identity" and "media." In Colorful Bouts, Hint of Deeper Struggles - NYTimes.com

If you click on the link lucha libre or Vampiro you get the flavor and the sound, without the strong smell of sweat. Don't miss!
Posted by Geoffrey Fox at 10:59 AM No comments:

Just got my first request to see the full novel, from agent and novelist Deidre Knight. And I only sent out the query on Saturday! Now I'm going to try to think about something else, like the other book I have to write for Norton, but the excitement makes it tough.
Posted by Geoffrey Fox at 11:15 AM No comments: