A thought for fellow writers: My guess is that self-publishing will become more and more common and that the stigma will continue to diminish. This is partly because commercial publishers are more and more reluctant to invest in risky books, and partly because self-publishing has become so much cheaper and easier. However knowing that a book has passed through an editorial selection process (that somebody besides the author thought it was worth publishing) is still an important way to reassure readers of quality.

Maybe what we need to do is form editorial collectives, so that a self-published author (who has paid to publish) has the imprimatur of a respected coterie of writers/editors before the book appears (instead of just hoping for such support in reviews after it is published). The collective would provide (in effect) a blurb of approval. The collective (maybe two or three writers, maybe more) would create a web page where its members' credentials (previous publications, etc.) could be consulted.

Any thoughts? Any volunteers to join me in such a project? We would read and either grant or not grant our seal of approval to new works submitted — but publishing and distribution (and the expense involved) would still be up to the author. If we didn't give our seal, the author could simply ignore us, but if we did, he/she could advertise that fact on the book cover.

Posted by Geoffrey Fox at 11:37 AM No comments:

The strengths of Europe

A look on the brighter side.

It's all true, we do have much less inequality here (in Europe — I'm writing from Spain) and even the poorest are nowhere near as poor as millions of people in India or China or other countries, or even in the poorer areas of the US. If these 27 countries could only get together on major issues like defense or economic policy, Europe could again be a power, and this time (unlike the era of imperialism) for good.
Posted by Geoffrey Fox at 11:14 AM 1 comment: 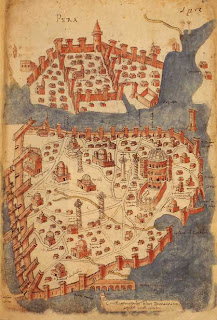 I'll be doing a reading from my novel A Gift for the Sultan this Friday at the Librería (Bookstore) Nobel in Vera (Almería province, Spain) at 8 p.m.

And on Thursday, I'll do a presentation in Spanish in the public library of Carboneras at 7 p.m.

I'm suppposed to be interviewed on the book on Turkish Radio, San Francisco — still to be scheduled.

And on January 4, I'll be presenting the book to a Turkish literary circle in Istanbul. Meanwhile, if any of you have had a chance to read the novel, I hope you will post a comment in the "customer review" section of the Amazon page. Thanks.

Another view, more critical than mine, written by Norman Daview in 2005 when the book came out and Tony Judt was still among us.

A book this length and this comprehensive, dealing with so many histories of so many countries, will inevitably have a lapse or two, I suppose. But Davies still seems to be fighting the Cold War, while Judt is not. And this criticism seems to me off-base: "Judt, however, is impervious to religion, unmoved by music and rather complacent about non-French and non-political branches of art and culture." — especially the phrase "unmoved by music." There's quite a bit about popular music trends, hilariously opinionated so he must have cared about it.

Thanks to Andrew Hull for pointing me to this review.

Posted by Geoffrey Fox at 1:23 PM No comments: