Congratulations: You too can pretend you're famous

I just got a mailing from the International Biographical Centre announcing, "You have been selected as one of IBC's TOP 100 PROFESSIONALS - 2009. This accolade is credited to those individuals that have fulfilled a standard of merit in the eyes of their peers that is beyond the norm."

I am thus entitled to a "distinguished and coveted honour" in the form of a "Full colour 16" x 11" Certificate" which I may purchase for only US$440.00 or £275.00 Sterling plus shipping and handling. Well, thanks, fellas, but I just don't have a good place to hang it.

Gee, I wonder how I won this. The letter says I should "feel proud of the influence you have on your colleagues and friends." Could it be because of my blog?

Email ThisBlogThis!Share to TwitterShare to FacebookShare to Pinterest
Labels: envy

More on our deeper and wider urbanization

Though this book isn't specifically cited in Mike Davis' Planet of the Slums (see blog entry below), it covers the same ground and uses many of the same case studies. Some of the findings are alarming but the authors eschew Davis' apocalyptic tone.

Every big city has problems -- urban population growth is chaotic and frenzied, especially in the global south, and often creates desperate conditions -- but some have found solutions that work better than others. Also, as Davis also notes, urbanization is reaching much wider than ever, that is, urban densities and the reach of urban music, crime, markets, disease, but also of urban opportunities, are extending much farther into what used to be the rural hinterland. The opportunities are real -- urban densities permit economies of scale for providing education, transport, housing and everything else more cheaply -- but are sabotaged by urban problems including the systems of exploitation that Davis focuses on.

For the book we have underway right now my concern is the built environment, the bricks and mortar and steel and tarmac, or clapboard and canvas or adobe and twigs, that make up the physical spaces of the city. This aspect is barely touched on explicitly in this National Research Council publication, but its chapters on the importance of location, "diversity and inequality", the urban economy and "the challenge of urban governance" are all relevant, because these things shape, and are shaped by, the physical structures. Our book is on Latin America, and there are many examples here and literature citations to follow up from São Paulo, Mexico City, and even smaller places like Porto Alegre (and many other cities in Africa and Asia). But there is a startling gap: barely a mention of Cuba, one of the countries that has done the most in innovative projects to confront "diversity and inequality" and other problems. Cuban approaches would be hard to emulate in other, non-socialist countries (although Venezuela is trying), and maybe haven't always been successful even in their own country, but they deserve serious, critical examination. (I'll try to work up something on the topic.)

Posted by Geoffrey Fox at 12:21 PM No comments:

For readers and writers, LibraryThing

Here is a very well designed and simple to use site for connecting readers to readers, finding books in any of dozens of categories and any of many languages (though most entries and all the labels are in English), and reading or writing reviews. It also includes sections specifically for writers.
Home | LibraryThing

My problem: I've been getting so engaged in these writers' sites I haven't done any writing lately! Except in the blogs, which don't count with my editor.

And be sure to check out "Hips Don't Lie" and then the more sober video on her "Barefoot Foundation" on Shakira's YouTube channel.

And now the down and dirty on the global horrors, too big for even Shakira's tremendous energy and good intentions:

Davis has done us a great service by pulling together global data and case studies to portray a monster that threatens to be the real Terminator, bigger, more deadly and more immediate than the movie version.

Slums are as old as industrialization, which first created them by bringing (driving) people from the country to the cities for their labor, without bothering to provide housing, schooling, health care or even adequate space for them to live. Dickens and Engels, Jack London and George Orwell all wrote vividly about them. But since the 1950s, they have been growing exponentially and now have devoured whole cities -- like Kinshasa, which once was a smallish colonial capital with usable streets, breathable air and urban amenities, but now (according to Davis) is an immense extension of hovels with no overall order, no services or infrastructure, and barely enough food and water for its 6 million people. (The Wikipedia article paints a slightly more favorable picture but says 8 million; for confirmation of Davis's description, check out Kinshasa est devenu poubelle (a video about an attempted drive across town) or these BBC photos, Kinshasa 'The Dustbin'.)

Starting with millions of "displaced persons" following World War II, followed by other millions displaced from their small towns and villages by revolutions, civil wars, mammoth construction projects such as the Aswan dam, the partition of the Indian subcontinent, and the environmental degradation of the countryside by mining and other industries, "urban" populations have multiplied even in places without infrastructure or jobs or anything else to draw them. Or police adequate to control them. They overwhelm the urban institutions, "ruralizing" lands on the outskirts and in the interstices of the cities as they establish their own norms, systems of local exploitation, and their own improvised solutions getting food, shelter and safety to survive another day. The process is especially pronounced in Africa (Côte d'Ivoire, Tanzania, Congo-Kinshasa, Gabon, Angola), the Indian subcontinent, and everywhere in the global south, but it's happening in Los Angeles and other cities too. And in the huge colonias of Mexico City, villas miserias of Buenos Aires, and barrios of Caracas, among other places.

Davis is especially hard on the IMF and its "structural adjustment programs" (SAP's), which demanded that poor countries privatize all services in order to qualify for loans, the result being the disappearance of public services and controls. And he is scathingly critical of what he considers neoliberal pipe dreams, that (as the one-time anarchist architect John Turner put it), slums could be the solution, not the problem. That is, with proper guidance, the creative energies of the slum population (building their own housing, for example, and even micro-industries) would boost national development and economic growth, bettering lives for everybody. But no, says Davis, with example after example from case studies, slum populations are so exploited, first by richer forces outside the slum (such as all those Indians who have made themselves wealthy by charging exorbitant rents for wretched housing) and secondly by one another (early squatters charge high rents from later arrivals, for example) that they have no margin to save to improve their housing or much less to grow a stable business.

Another pipe dream that seemed to offer solution without cost has been Hernando De Soto's loudly proclaimed insistence that granting titles of ownership to squatters would release great sums of capital for entrepreneurship. Again using case studies, Davis lists what he calls the "epistemological fallacies" of such arguments. 1, "de Soto's heroic 'micro entrepreneurs' are usually displaced public-sector professionals or laid-off skilled workers," i.e., "entrepreneurs" by necessity, not choice. 2, very few of the working poor are truly self-employed, but renting space or tools -- the rickshaw that they pull, the wheelbarrow they haul, etc. -- from somebody just a little less poor, in a system of endlessly franchised petty exploitation. (Points 3, 4 & 5 are really elaborations of that same point 2.) Then 6, desperation over the real economy turns slum dwellers increasingly to seek semi-magical solutions, such as gambling and pyramid schemes, often with magical invocations to religious spirits. 7, financing by microcredits as in the Grameen Bank, important as it may be to the survival of a few, will never allow sufficient accumulation to help very many people; rather, they've become the "cargo cult" of NGO's, a seemingly low-cost solution that isn't. 8, "increasing competition with the informal sector depletes social capital and dissolves self-help networks and solidarities" -- the poor are fighting against the poor.

So what do we do? Well, according to Davis, we'll have to wait for his next book to find out. Or we can try to do something, like the Grameen Bank loans or Shakira's "Barefoot Foundation," to solve at least a small part of the problem. It may be that the efforts of people like Shakira and the Grameen Bank's Muhammad Yunus will make enough of a difference in enough people's lives in enough places in the world to change the whole slumming dynamic. But even if they don't have such a wide impact, efforts like those and the stairway a bunch of us built in a Caracas slum at least make lives easier for some people for some time. It's not enough, but it's something.

For another view of slums, check out this article on architect José Castillo by Carlos Brillembourg (BOMB 94/Winter 2006). 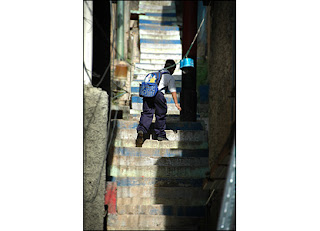 (Image of a Caracas stairway -- not the one I worked on, but similar -- from BBC Mundo: Venezuela -- la vida en un barrio. Good series of slides.)
Posted by Geoffrey Fox at 7:30 PM No comments: