Thanks to Larry Dignan for sharing this link. Since Facebook and Acción en Venezuela friend Jess Brodnax once asked me if there was such a list, I imagine that other visitors to this blog might also be interested:

Maybe I should try to get through all these books myself. I'll say just a word about the few that I have read.
That's enough for today. I'll take a look at the other parts of the list, Spanish-language novels from countries other than Spain, some other day.

Art meets politics in Istanbul and the Armenian diaspora

The Bastard of Istanbul by Elif Shafak

This is an artfully constructed book with two contrary agendas, both essential, but not entirely comfortable with one another.

First, the literary agenda: The quirks, foibles and virtues of a large number of complex characters, understandable even when not exactly lovable, are described in rich and vivid language, their personal dramas interwoven and mostly resolving in surprising and satisfying ways. The literary ambition is signaled in the opening chapter — the sounds and sensations of rush hour in Istanbul in a rainstorm, and the furious and impious thoughts of young Zeliha as she hurries through the broken streets to a critical appointment, are delightful, frightening and hilarious, and will be unforgettable. And then we meet the other badly split family of the Armenian American girl, and then back to Zeliha and her three sisters, each eccentric in a different way, and her mother and grandmother living in sweet but comical confusion.

But there is another agenda, political and didactic: Elif Shafak wants us to face a terrible tragedy — the killings and deportations of Armenians in 1915 — and to help all of us, but especially Armenians and Turks, to come to mutual comprehension and forgiveness today.

The contemporary Turks of the novel (and, I think, in reality) have no problem whatever with their Armenian compatriots. None of Zeliha's friends thinks it remarkable that her lover, Arman, is Armenian; for them, "Armenian" is just another variety of Turk. But when Zeliha's now 19-year-old daughter Asya introduces her new friend Amy — or Armanoush — to her friends in the bar as an Armenian American, they are suddenly on the alert.

As Asya begins to tell the tragedy of Armanoush's Istanbulite family, the execution of her great grandfather because he was an intellectual, one of the drinkers at the table blurts out, "That didn't happen."

The problem is that Armenians in the diaspora cannot forget their terrible history, while Turks cannot remember it or, if they have even thought about it, accept a version where both sides did awful things and nobody now is to blame — 1915 was long before they were born, Turkey was a different country, and none of that has anything to do with them.

But Shafak insists that it does have to do with them, because until Turks recognize and acknowledge the pain of the Armenians they are in effect accomplices of a massive cover-up. But on the other side, would Armenians in the diaspora ever accept any reasonable concessions or admissions by the Turks?

When Armanoush gets Asya to take part in an on-line forum of Armenian Americans, one of them immediately demands that she as a Turk recognize the genocide. The young but well-read Asya writes back, "Genocide is a heavily loaded term… It implies a systematic, well-organized, and philosophized extermination. Honestly, I am not sure the Ottoman state at the time was of such a nature. But I do recognize the injustice that was done to the Armenians. I am not a historian. My knowledge is limited and tainted, but so is yours."

And then she asks, "Tell me, what can I as an ordinary Turk in this day and age do to ease your pain?" And the Armenian Americans, never before confronted by such a question, have no plausible answer. Apologize, says one after a long pause. For something she had no part of? Get the Turkish state to apologize, demands another. But how could she get the Turkish state to do anything?

But then another Armenian American forum member joins in, one who calls himself "Baron Baghdassarian" and whom we have been taught to expect to be wiser than the others, and surprises everyone by typing:

“Well, the truth is… some among the Armenians in the diaspora would never want the Turks to recognize the genocide. If they do so, they'll pull the rug out from under our feet and take the strongest bond that unites us. Just like the Turks have been in the habit of denying their wrongdoing, the Armenians have been in the habit of savoring the cocoon of victimhood. Apparently, there are some old habits tht need to be changed on both sides.”

And whether or not you believe that a real Armenian American might write that in an on-line forum, it is clearly the opinion of Elif Shafak.

The on-line forum allows Shafak to introduce political discourse by characters who have no existence beyond their cyber presence. And to describe events for which there is no human testimony, an ancient djinni who has been magically enslaved by Zeliha's eldest sister, the clairvoyant Banu, gives his eye-witness account.

In this literary tale all the decisive actors (actresses) are women and the men, whether comical, sympathetic or pathetic, are necessary but secondary figures like Poins or Bardolph in Henry IV, useful for displaying some aspect of the more complex (and always female) protagonists. That for me was one of the pleasures of the book, allowing me to enter the consciousness of so many and such complex girls and women.

The blatantly political segments interrupt the flow of the other, literary story, sometimes jarring the reader's willingness to believe. But they enable Shafak to describe that terrible history.

The book is charming, sometimes stunningly beautiful, often outrageously funny, sometimes deeply sad. And because of its political content, it is also a very brave book. Elif Shafak knew she was taking a major risk when she published the original version in Turkish, that she would offend powerful members of the state and risk imprisonment. And I imagine that her version of events will also greatly offend members of the Armenian diaspora, for the very reason "Baron Baghdassarian" expounded. And for all these reasons, it's a book we need to read.

Armenians in Turkey - Wikipedia, the free encyclopedia
Posted by Geoffrey Fox at 6:41 PM No comments:

The bankers are safe

Now isn't it good to know that?

Email ThisBlogThis!Share to TwitterShare to FacebookShare to Pinterest
Labels: economy, US politics

Calling all authors; Red Room spiffs up its site

The Red Room is a lively gathering place for authors to talk shop, trade notes, promote books, or just hang out. And now it looks better than ever. I hadn't been spending a lot of time there, but a new team of editors (I think they're new, at least they've got some new ideas) has just made it more lively, and at their urging I've added some posts to my blog there. So if you are an author, you won't want to miss this forum. And check out Geoffrey Edmund Fox's blog to see what it looks like (mostly the same content you've seen here, but presented a little differently). The Red Room is probably the only place where you'll see my middle name — so you don't confuse me with all those other Geoffrey Foxes out there.
Posted by Geoffrey Fox at 10:29 AM No comments:

'Latinos' among us, since forever

Here's a strong voice reminding us of something all Americans need to know.

The Myth of the ‘New Wave’ of American Immigrants : Dispatches from Exurbia

Thanks to LouBette Herrick for letting me know of Deborah Méndez-Wilson's blog. And for more reading on this topic, check out my Hispanic Nation: Culture, Politics, and the Constructing of Identity

Posted by Geoffrey Fox at 9:46 AM No comments:

Email ThisBlogThis!Share to TwitterShare to FacebookShare to Pinterest
Labels: Latinos 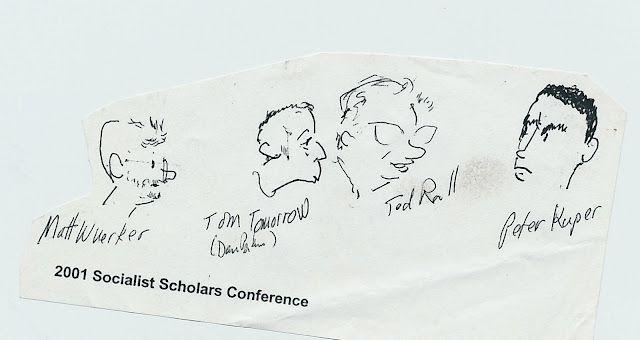 Here are my notes (recenty recovered from an old file) from the cartoonists panel at this long-ago conference in New York City. These guys exist to remind us that we can't understand anything about modern politics if we take our leaders seriously.
To see current work by Matt Wuerker, check out the Cartoonist Group; for "Tom Tomorrow," see This Modern World. Ted Rall's drawings and writings (he uses his pen both ways) are at his Rall.blog. Peter Kuper's work (some of it for The Nation) can be found at peterkuper.com ; I don't know why he looked so sour when I drew him. This stuff is supposed to be funny.
Posted by Geoffrey Fox at 2:12 PM No comments: