Envy in the courts

Friend and colleague César Chelala just sent me a link to his latest opinion piece, Elie Wiesel's Wrong Move on Peace | CommonDreams.org   I just dashed off a reply which I'll share here with you, about a different issue of great concern.


Thanks. I was unaware of Wiesel's letter and the response. It is appalling that he could be making such statements.

Speaking of appalling, I am deeply, deeply disturbed by the campaign of a cabal of jealous judges to humiliate the best of their fraternity, Baltasar Garzón. And I'm deeply impressed by the dignity of the man under attack, who, despite all, continues doing his job and just yesterday appeaed and spoke at a conference commemorating the attacks on Jews during Argentina's dirty war. There's nothing I can do to help him, other than to express my support; the whole world of human rights jurists has mobilized in his defense, but those few Spanish judges, jealous of his fame, remain determined to do him in, as an exemplary sacrifice of any of their number who dares stand up to power.

The latest is a maneuver by Judge Luciano Varela, supported by a coterie of anti-Garzón judges, to head off the possibility of Garzón's acceptance of a temporary (7-month) appointment to the International Court of Justice in The Hague, where prosecutor Luis Moreno Ocampo was eager to have his assistance. They are completely unconcerned about the enormous damage they are causing to Spain's international reputation as an upholder of justice, a reputation that was perhaps undeserved, because it depended almost entirely on the work through the years of Baltasar Garzón.

Luis Moreno-Ocampo - Wikipedia, the free encyclopedia
Posted by Baltasar Lotroyo at 10:22 AM No comments:

These people just discovered me on Twitter, and I'm glad they did. You writers and readers (that must include anybody who ever looks at this blog) should also enjoy this.
Cognitive Theory For Breakfast | Radio Litopia

If you don't want to listen to the whole thing (a lot is pretty silly), here are the 4 rules for big e-sales of books, even by a completely unknown author (from Joe Konrath, who writes under various pseudonyms):
He means under $5. He claims to be making $140,000 a year on sales of e-books priced at $1.99.

Posted by Baltasar Lotroyo at 6:19 PM No comments:

Spain in the World 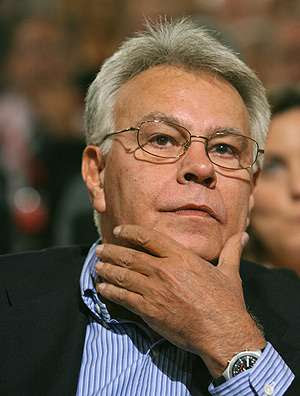 Today we are going to talk not just about Spain, but about the World -- because, as Professor von der Vogelweide might say, there isn't anything else. And because Spain, where I now sit before this computer window, is as good a place as any, and better than most, for observing the challenges to democracy in this rapidly changing world.

Friday night we were fortunate to catch the interview of Felipe González by one of Spain's most respected media journalists, Iñaki Gabilondo, on the eve of González's presentation of the report by the European Council's "Group of Wise men," which González chairs, on new directions for Europe.

González is one of a very few active statesmen who thinks clearly and disinterestedly (he's no longer running for anything) about Europe and the globe. His thinking is informed by his experience in the underground against Francisco Franco and as Socialist Party leader and president of Spain (1982-96) during the post-Franco democratic transformation known here as "the Transition". He knows that what happens in Spain is critical for determining the future of Europe, and whether Europe is able to sustain physical well-being and democratic rights for its people will matter to the entire world. Not in the ways or to the extent it used to, when Europe ran the world, but still as one important player with a lot to offer.

Spain's economy is either the 9th or 10th largest in the world, according to IMF, World Bank or CIA rankings, its population of 47 million is the 5th largest in the European Union; and as if that weren't enough, I just discovered that its National Library is the fourth most important in the world! (El País, today).

But Spain matters for other reasons, beyond its comparative rankings, because of its unique history and geography. Its language is spoken almost as widely as English, as the national language of over a score of countries in Latin America and in Equatorial Guinea in Africa, and is still remembered at least in traces in its former colony of the Philippines -- and is a second language for many more people in all continents. Even more important, its relative success and its sometimes conspicuous failures in establishing the rule of law and democratic rights, in the wake of a long and especially brutal dictatorship, have been examples to the many countries facing comparable challenges. Its long history of intimacy with the Muslim world, its many governmental aid programs in Latin America and elsewhere (including both central government and programs by autonomous regions such as Andalucía) and all that energetic NGO activity by its private citizens give Spain an international presence well beyond, say, Japan's or the U.S.'s in proportion to population and GDP.

Thus Spain's successes and failures set off vibrations around the world, especially in Africa and western Asia and Latin America.

Often we look at the gross inefficiencies and partisan politics in the court system, the high unemployment and private debt in the economy, the attacks on public services, the high incidence of political corruption, and we are dismayed that things are not working better. But then, if we look at where the country is coming from, it's a wonder that they work at all. A constitutional democracy built out of the ruins of Franco-ist law and military traditions, monarchy, regional nationalisms (Catalans, Basques, Gallegos, Valencianos and others), trade union demands and Republican aspirations is a structure of precarious stability. Keeping it together and consolidating it matters to a whole lot of people, far beyond Spain and far into our future.

That's why I get so upset by stupid Spanish self-sabotage, like the judiciary's attacks on Judge Garzón, or the dismanteling of the pretty good public health system by regional presidents such as Esperanza Aguirre, or the refusal to cooperate in a national economic rescue plan, an educational reform or anything else constructive by Mariano Rajoy and his Popular Party. And that's why I keep writing about Spain.

Project Europe 2030 - A report to the European Council by the Reflection Group on the Future of the EU (English, pdf) 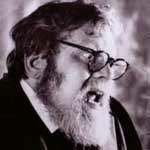 Professor Walter von der Vogelweide (Severn Darden) explains it all, in his Lecture on Metaphysics:
"Vy, you ask, am I going to talk about zee Universe? Because zer isn't anysing else!!"
(Photo of Severn Darden in another role from Cinefania, "Planet of the Apes")
Posted by Baltasar Lotroyo at 7:54 PM No comments: