Honoring the Enemy, A Lesson From Gallipoli

Thanks to our friend César Chelala for this article from his series International Perspectives with Dr. Cesar Chelala in Epoch Times.

As César points out, there are many lessons from Gallipoli, for all the countries involved. Also several films and books, memorials and cemeteries, and political careers destroyed or enhanced. This history, and the magnanimous gesture recounted by César Chelala, go far to explain the reverence for Mustafa Kemal in modern Turkey.

Map is if from the Gallipoli Guide — Anzac Day for New Zealanders, which offers a virtual tour of the peninsula.

Posted by Geoffrey Fox at 5:54 PM No comments:

Email ThisBlogThis!Share to TwitterShare to FacebookShare to Pinterest
Labels: Turkey

Why the 1% Love "Anarchist Violence"

A good friend just sent me this article by Steve Weissman, which roused memories and emotions or not-so-long-ago.

Why the 1% Love "Anarchist Violence"

Astute analysis. It makes me think back on my own experience, which was different because my theater of operations then was the Chicago area.

There our movement started out on the campuses — I had founded an SDS chapter at Northwestern by bringing together three or four separate single-issue clubs already recognized —but reached out to link to community groups, especially (in Evanston IL and Chicago) black, mostly church-based organizations. They got us to contribute to demanding better housing and better schools by sit-ins, marches and heavy leafletting, and we helped them make their constituents more aware and more angry about the toll theirs sons were paying in the US's futile and odious Indochina war. Such days. We, or some of us, also made contact with young labor activists. These were workers and mostly union members from those other ethnic communities — Polish, Italian, Ukrainian, Czech, even some Irish — some of whom were discovering Marxism-Leninism through the small, short-lived W.E.B. DuBois Club, where I came into contact with them.

It was during the Democratic Party Convention of 1968 that for the first time in the most dramatic ways we did face the issue of provocateur violence. And especially the absurd plots that the police attributed to the Chicago Seven and the even more absurd (and much funnier) fantasies that the Yippies invented in reply.

We continued to draw on students from many Chicago-area campuses, but the twin issues of racial and ethnic discrimination and the Vietnam war brought us together with young labor activists and then, increasingly, other non-student youth from the several ethnic communities (Appalachian whites in the "Young Patriots", Puerto Ricans in the "Young Lords", Mexicans in a couple of separate "Raza" groups) systematically and intelligently politicized by the Black Panthers, under the very capable leadership of Fred Hampton.

The Panthers made a display of self-defense, but that was mostly a pose; the real violence always came from the police. They assassinated Fred in his bed shortly before Christmas 1969, but he had established a strong enough base that the movement survived and gathered new support — since the murder had been so blatant. (For much more on this, including video clips of Hampton showing why he was such an effective leader and thus such a threat to the likes of Atty. Gen. John Mitchell, FBI chief Herbert Hoover and Nixon, see this 2009 broadcast The Assassination of Fred Hampton on Democracy Now.) The day Fred's lieutenant Bobby Rush sought and received refuge in the church of Jesse Jackson, icon of ML King's non-violent movement, marked a major breakthrough for all of us, a joining of hands of dissheveled young radicals and well-groomed, church-attending family folk who just weren''t going to take it any more.

In sum, what I've taken from all those experiences is that nonviolence must be the preferred strategy — as it was for Fred Hampton — but not an unwavering principle. Not when, as Hampton put it, the enemy doesn't even know what "peace" means, when like the US's Cointelpro then or Bashar al-Assad's tanks and planes today they threaten to wipe out your whole community. But that is not (yet) the nature of conflict in Oakland. As long as possible, nonviolence has to be the preferred strategy because it is the most effective, because the victory sought is not a shift of rulers over the same system but a social transformation, making the blind defense of privilege impossible. But you knew that already.

Posted by Geoffrey Fox at 1:48 PM No comments: 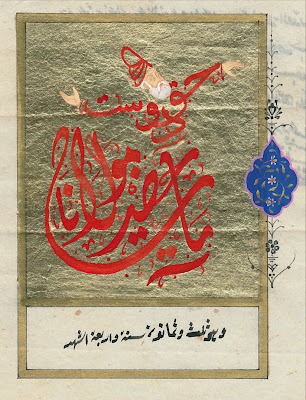 I could not resist buying this miniature by Özcan Özcan last Tuesday in Sultanahmet, İstanbul.
The Ottoman script forming the dervish's skirt and tunic says "Ya hazreti Mevlana" — "Oh! Most holy Master" (i.e., the Mevlana Rumi).
I suspect he has been watching the news of all the street demonstrations, from Tahrir Square to Homs and Madrid and Oakland and Wall Street. Its enough to keep you spinning, Oh! Enlightened Ones.
Or maybe he just been reading Rumi's Divani Shamsi Tabrizi. That too is well worth a whirl.
Posted by Geoffrey Fox at 12:20 PM No comments:

When I described myself as a "red dervish" a little while back, this is what I meant: red (as in revolutionary), and like a Sufi dervish personally drawing strength from my vision, the vision of our latent collective power — that of all humanity — to conquer the evil within and among us and release our more powerful impulses of love and solidarity. A Sufi would call that evil "Sheitan," a more modern name is "capitalism."  Or as the great Turkish poet Nazım Hikmet (himself something of a red dervish) put it, to live "like a forest in solidarity, / this is our yearning."

Davet (Invitation); for the complete translation, see this Wiki version.

Posted by Geoffrey Fox at 9:57 AM No comments:

The Forty Rules of Love by Elif Shafak


The encounter and transforming love between Rumi and the wandering dervish Shams i-Tabriz in the 1240s is background, context and explanation of the transformation in 2008 and 2009 of Ella Rubinstein, Jewish American housewife in Northampton MA, through contact with their story. Shams turns the respected and sedate scholar Rumi into a poet and co-founder (along with Shams) of the whirling dervishes; their story turns Ella from a self-repressed, resigned wife in a loveless marriage into a free and adventurous woman. Alternating chapters are told from the points of view of Ella or Shams and the many people who come in contact directly with him in Konya, Damascus or Tabriz. His stern but gentle manner and his preachings of love arouse strong reactions, ranging from murderous hostility on the part of Islamic zealots to almost total identification by Rumi, from respect and devotion by outcastes whom he has consoled and aided to the one kind of love he cannot allow himself, the passionate, carnal kind. Which may be what you thought this book was going to be about, but no, Shams' 40 Rules of Love are Sufi rules, of accepting one's fate but aiding and preventing harm to others and trusting in God's overall just design of all things. The book is a welcome introduction to this moment in Sufism and the origins of the Mahlevi whirling dervishes ("Mahlev" or master was what Rumi was called), and the twin stories — of the 13th and of the 21st centuries — come to a satisfying conclusion.

However, Shafak's narrative structure and voice here are so limited that one longs for a little break now and then. Each chapter tells us the thoughts and observations of just one character at a time, often telling us things that they would be unlikely to say even to themselves, and everybody sounds alike, whether a drunk or a prostitute or enlightened one in Konya in 1246 or Ella Rubinstein in 2008. The drunk tells us he is drunk but he doesn't sound drunk, the angry zealot tells us he is an angry zealot but doesn't sound very excited about it, and so on. “"Beauty is in the eye of the beholder," Shams kept saying.” (p. 268) He sounds just like Ella. These limitations are quite unlike Elif Shafak's approach in her earlier novel, The Bastard of Istanbul (see my review), where there are different voices and narrative points of view, including a genie and an Internet forum. But "40 Rules" comes to a good, perfectly Sufi ending, which goes far to compensate for other weaknesses, and in the course of reading it we learn much about why Sufism is so appealing to so many.


View all my reviews
Posted by Geoffrey Fox at 12:03 AM No comments: