But to my annoyance, my alter ego Baltasar Lotroyo has beaten me to the punch with his own blog entry: Lecturas y lectores: Ficción, historia, ficción histórica. As you see, if you read even a little Spanish, I've plagiarized his title. And for those who don't read Spanish easily, I'll sum up his main points.

Balta begins by quoting Vargas Llosa from a recent interview, “I have never written a historical novel.” And then goes on to mention three of Vargas Llosa's novels situated in and based on extensive investigation of historical events: his latest, El sueño del celta; his La fiesta del chivo, and the one that concerns us here, La guerra del fin del mundo.

This dense, long, and powerfully moving book (first published in 1981) is dedicated to Euclides da Cunha, “a tragic figure and one of the greatest of Latin American narrators,” known today almost exclusively for his great book Os sertões, which has been recently re-translated as Backlands: the Canudos campaign

. (There is also an earlier translation, Rebellion in the backlands

, 1957, by Samuel Putnam — but probably harder to find now.) So let's begin with Da Cunha and his story, considered by many Brazilians to be the greatest work of literature their country has produced.

In 1889, Brazilian military units backed by the urban elites of Rio de Janeiro and Salvador da Bahia, deposed the aging Emperor Dom Pedro II and declared the country a Republic, and the new republican rulers initiated a whole panoply of reforms meant to “modernize” the country, that is, to make it look more like the European countries they emulated. Just the year before, Dom Pedro had finally succeeded in pushing through the abolition of slavery, and for this and other reasons he was revered by many of the poor, non-urban, non-propertied, illiterate or barely literate majority of Brazilians. Nor did these poorer, non-elite groups understand or accept such changes as the introduction of the metric system, a census, increased taxes.

In the deep backwoods of the northeastern state of Bahia, with a mestizo population — whites, Amerindians, blacks and various combinations — and a primitive economy of hard-scrabble agriculture and cattle-raising, where the mounted police rarely entered the dense scrub, gulleys, canyons mountain peaks and bandits roamed at will, the people were especially suspicious. And when a tall, thin, ascetic preacher with penetrating gaze and a direct line to the will of the Good Jesus walked barefoot into their villages, telling them everything that was wrong with the republic and urging devotion to the Good Jesus and to the traditional ways, more and more of those villagers and wanderers followed him. His name was Antônio Vicente Mendes Maciel, but he was known as Antônio Conselheiro ("the Counselor").  And this was the unlikely, and to city folks from Rio or Salvador incredible, beginning of what grew into a massive and extremely bloody revolt against the new state.

(To be continued)
Posted by Geoffrey Fox at 10:35 PM No comments:

My video on A Gift for the Sultan

In this informal 7-minute video I say how A Gift for the Sultan is a radical break from what I've written up to now (almost all of it on Latin America) but also how it is a continuation of my life-long concerns with the conflicts and interpenetrations when cultures collide. I also show you a bit of the place where I live and work. We taped it for my Amazon Author page, where it should show up tomorrow. Meanwhile, you can see it here on YouTube.
Posted by Geoffrey Fox at 2:33 PM No comments: 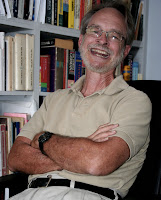 I've just updated my Amazon Author Page, with a profile and another, happier photo of me — there's no room for modesty when you're trying to sell your books —and more info on the books. Soon, maybe even later today, I plan to put up a short video explaining how and why I wrote my latest novel, A Gift for the Sultan, and showing the place where I work (it's really lovely).

There's a link at the bottom of the Amazon.com page that opens when you click on any of my books (they've got seven listed, but one title twice, so it's really only six).  If I've done this right, an RSS feed should place this and other new Literature & Society blog posts there, too.
Posted by Geoffrey Fox at 11:10 AM No comments: