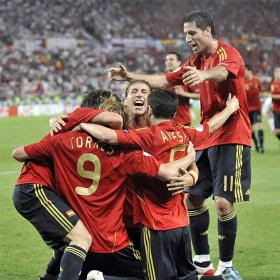 One reason that natives and the rest of us who live in and love Spain are so wildly enthusiastic about "La Roja"—"The Red," so called for the usual color of their uniforms—is that our fútbol champions seem to be the only Spaniards who know how to work as a team. If only the políticos could try that, instead of constantly sabotaging one another maybe this country could climb faster out of its recession, or the 17 autonomous communities each scrambling for more rights than its neighbors, or the judges, so anxious when one of their number is a star player that they have to gang up to disqualify him (see my earlier notes on the disgraceful actions against Judge Baltasar Garzón, but he's not the only victim).

And the other reason is that those 11+ players (11 on the field plus the guys on the bench) and their trainer and support staff are—mirabile dictu—famous but with not even a whiff of suspicion of corruption. How rare in Spain, where the idea of the rich and powerful is that winning is everything, todo vale—that is, "anything goes"—in pursuit of political or other victory or money or sexual conquest.

And they are so good!

Oh, and I just discovered that Eduardo Galeano's magnificent book (cited in a recent blog) is available in English: Soccer in Sun and Shadow. (Now, why do Americans call fútbol "soccer"? It's played with the feet, which is why the English (who invented it) called it football. And why do we Americans give the name "football" to that other game, where the ball is not advanced exclusively by kicking but by throwing or carrying it while crashing bodily through opponents, instead of calling it, say, "war"?)

In about half an hour we'll be joining our buddies in the Asociación Cultural Levantisca to cheer on la roja and see just how good they are. ¡A por ellos, España!

(Not that I have anything against the Dutch. But it would be immensely satisfying to see a victory of "the Red" over "the Orange.")

Posted by Baltasar Lotroyo at 8:08 PM