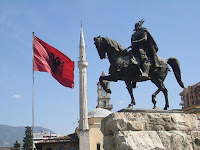 According to this Wikipedia article, the historical Skanderbeg did not abjure Islam and rebel against the Ottoman sultan until 1443, holding out until 1466, so this novel stretches history in several ways. But the details of siege warfare sound authentic, and even though this particular siege is an invention, the Ottomans did suffer some equally disastrous defeats as depicted here before their final, overwhelming triumph.
Posted by Geoffrey Fox at 6:32 PM