Back to my novel in progress: Eugène Varlin

My new novel is about a crisis in a different city, in a different time. Not Constantinople in the 15th century, but Paris in the 19th, and very especially the Commune of 1871. And for this I had to read this book:

The life and writings of one of the true working-class heroes of the Paris Commune of 1871, Eugène Varlin, bookbinder, labor organizer, promoter of women's equality in work and in the movement, and ultimately batallion commander and combatant slain in the final days of the Week of Blood, the "Semaine Sanglante" that crushed the Commune. Paule Lejeune, author of many books on feminism and French history, has pulled together letters of Varlin and other texts putting his life in context. 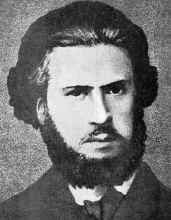 I admire Varlin enormously, and was delighted to find this modest little book put together very conscientiously by a woman who has worked for years for good causes and on the recovery of obscured revolutionary history. (Check out her list of oeuvres on this Wiki site: Paule Lejeune.)

Among the reasons for my admiration of Eugène Varlin are that he was a superb labor organizer and one of the few elected members of the Commune to keep his head amidst all the frantic rhetoric and chaotic orders and counter-orders after the Versaillais finally broke through the Commune's defenses. He was also a surprisingly articulate and clear, largely-self taught radical journalist and thinker, as the articles and letters assembled by Lejeune will make clear. And very practical: it was his idea, for which he recruited Nathalie Lemel and other workers, to set up the low-cost working-class restaurants known collectively as La Marmite, which became popular centers not only for simple, cheap nutrition but also for developing social relations among workers in different métiers and of both genders.

He could have escaped, in those last desperate hours, as did many others — shaving his beard would have been a good start for a disguise. But he was almost the last commander standing — he had been elected a battallion commandant — and would not desert the barricade. When all ammunition was exhausted, he was seized and slaughtered. He was 32.

Varlin was also a founding member of the Paris section of l'Association Internationale des Travailleurs (A.I.T.), what we know today as the First International.
Posted by Baltasar Lotroyo at 8:54 PM